SIEM Ship Management  is a member of the Siem Industries Inc group of companies that includes Subsea7, Siem Offshore AS and Star Reefers.

History of this company dates back to the mid 90’s and is the
result of numerous single ship acquisitions
and corporate mergers.

The origins go back to the vessels owned and operated by Irgens Larsen AS, and can be traced in various forms through Kvearner Shipping AS and Swan Shipping ASA. During 2001 an intense reengineering of the company and its business strategy was put in motion. In December 2006, STAR Reefers embarked on a policy of vertical integration by deciding to form its own Ship Management Company in Poland and Star Reefers Poland was formed in January 2006 to manage the vessels. In July 2015, STAR Reefers Poland changed its name to SIEM Ship Management due to owners decision to diversify the fleet portfolio.

We will constantly strive to implement the critical initiatives required to achieve our vision. In doing this, we will deliver operational excellence in every corner of the Company and meet or exceed our commitments to the many stakeholders we serve.

We are determined to be the best Ship Management Company. We continually earn recognition and trust from clients, stakeholders and staff through our ability to anticipate, learn and shape our future. We use our resources to develop effective solutions and services for our clients.

” THE IMPOSSIBLE WE CAN DO BUT MIRACLES TAKE A LITTLE LONGER “ 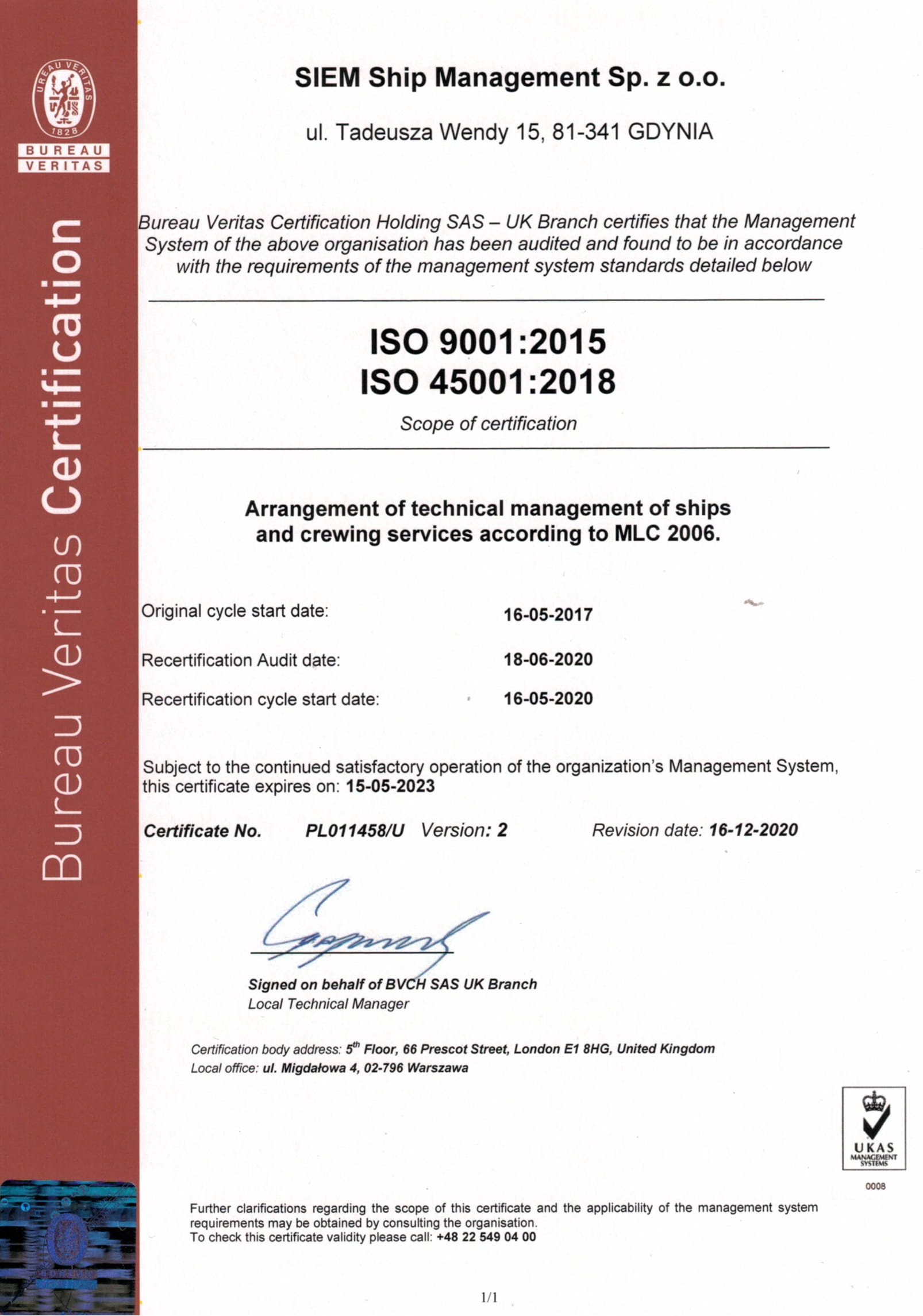 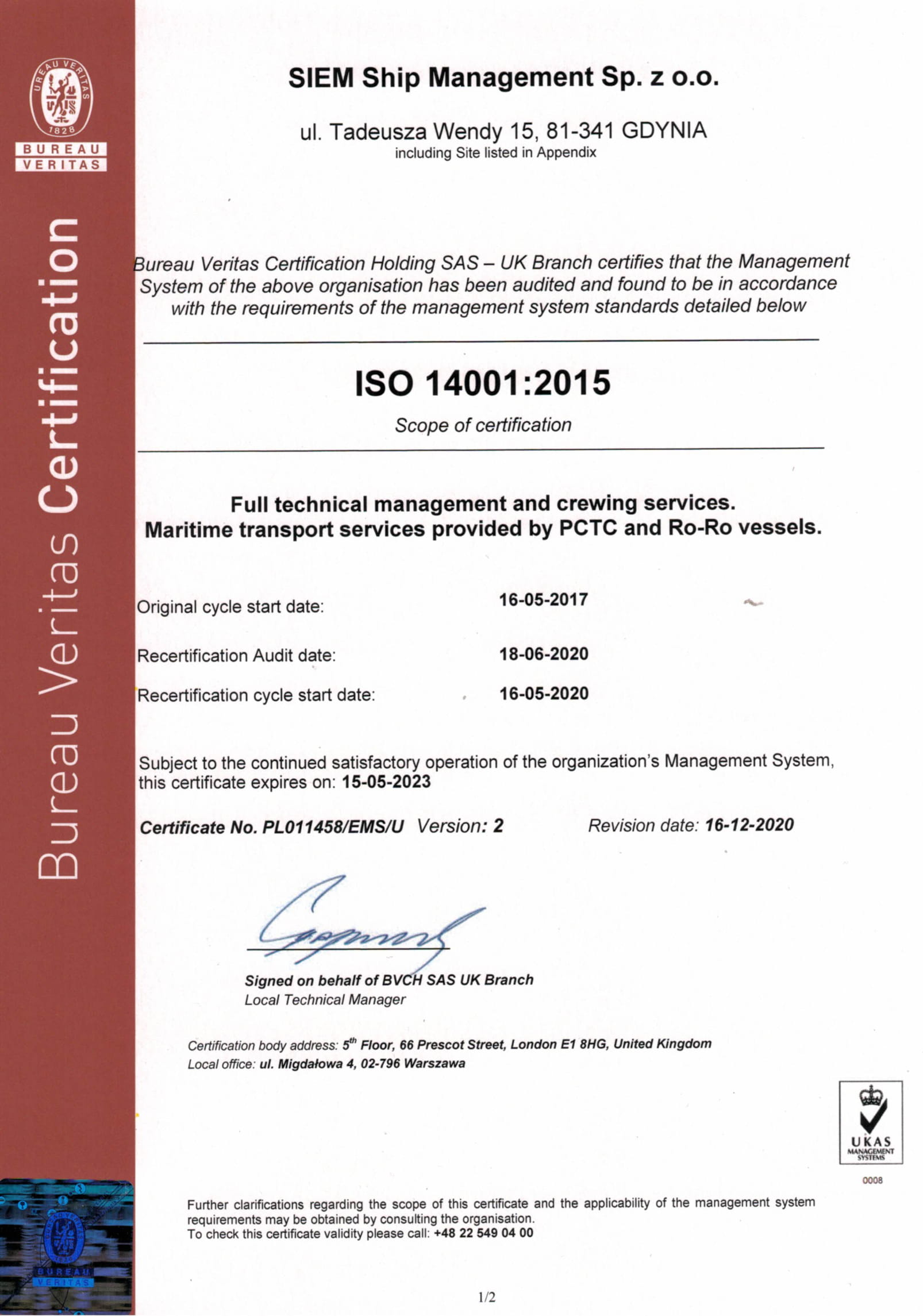 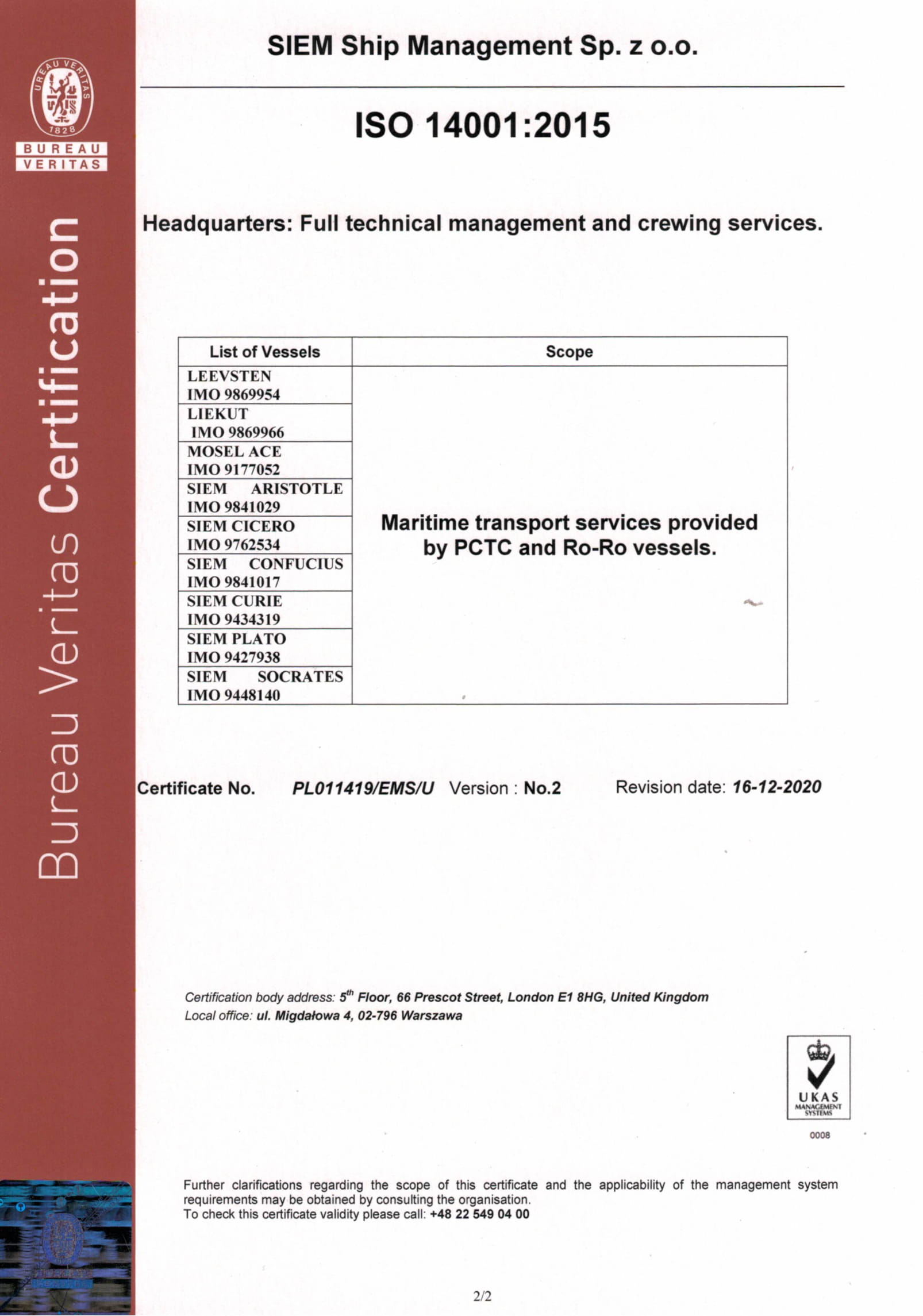 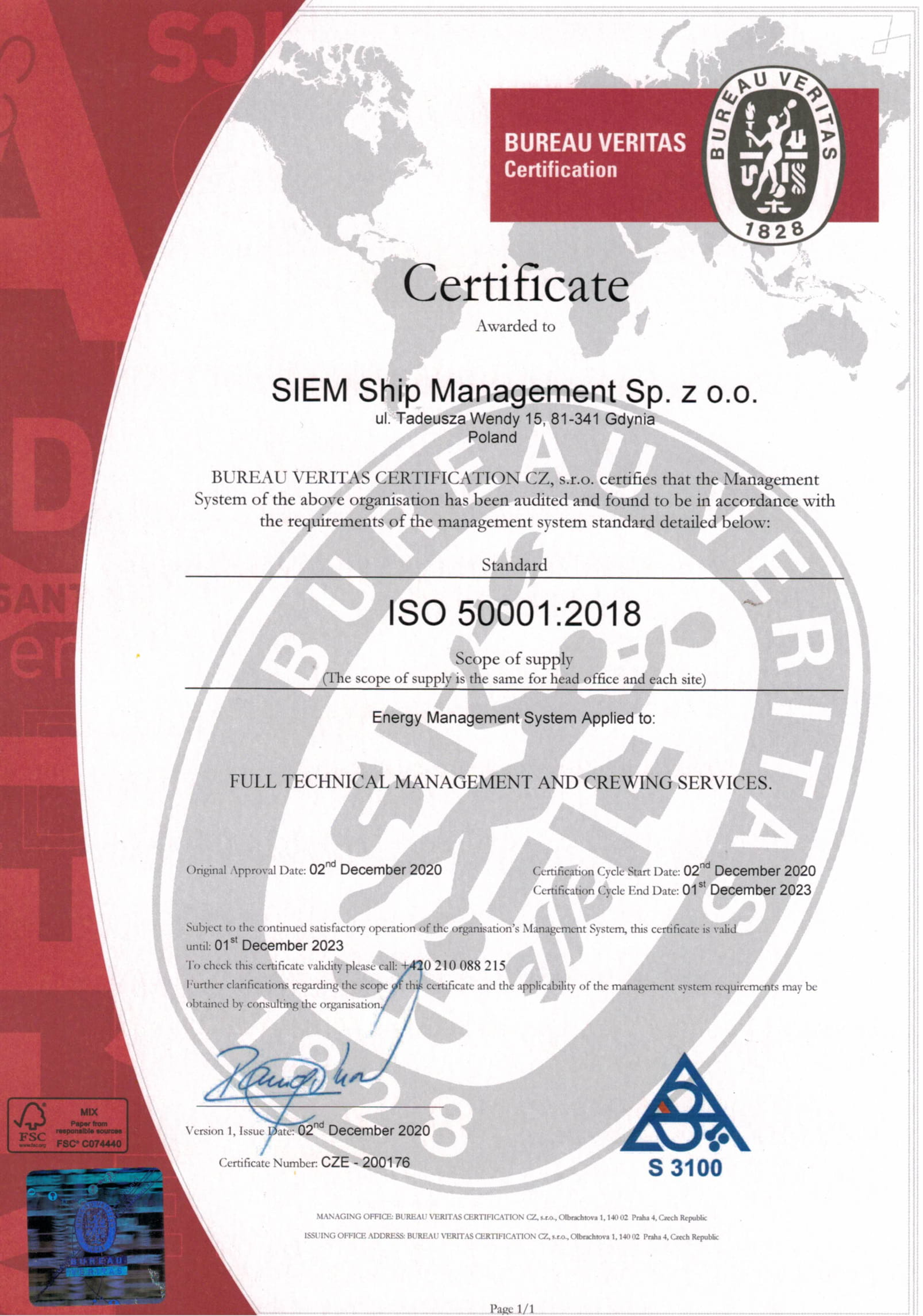 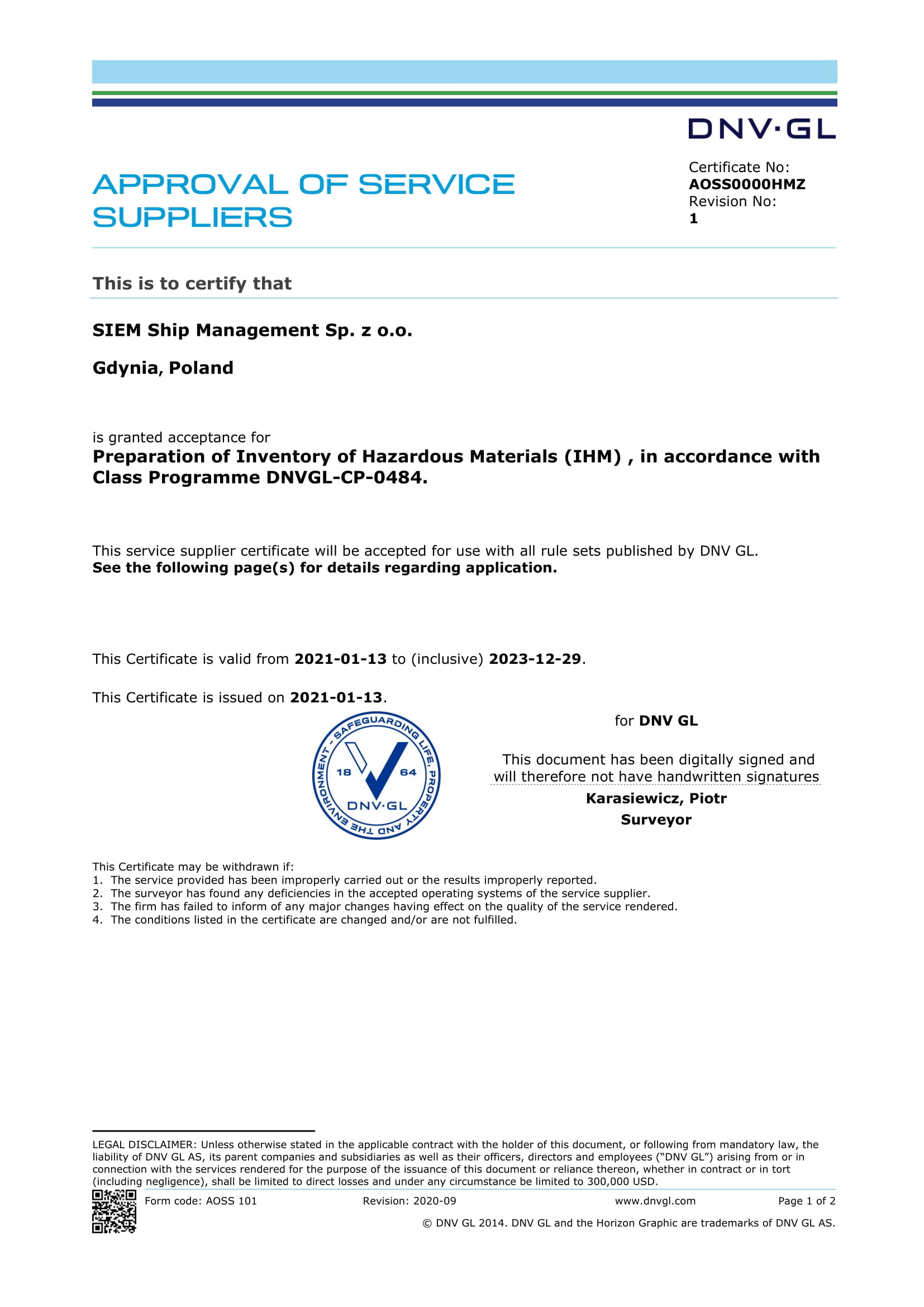 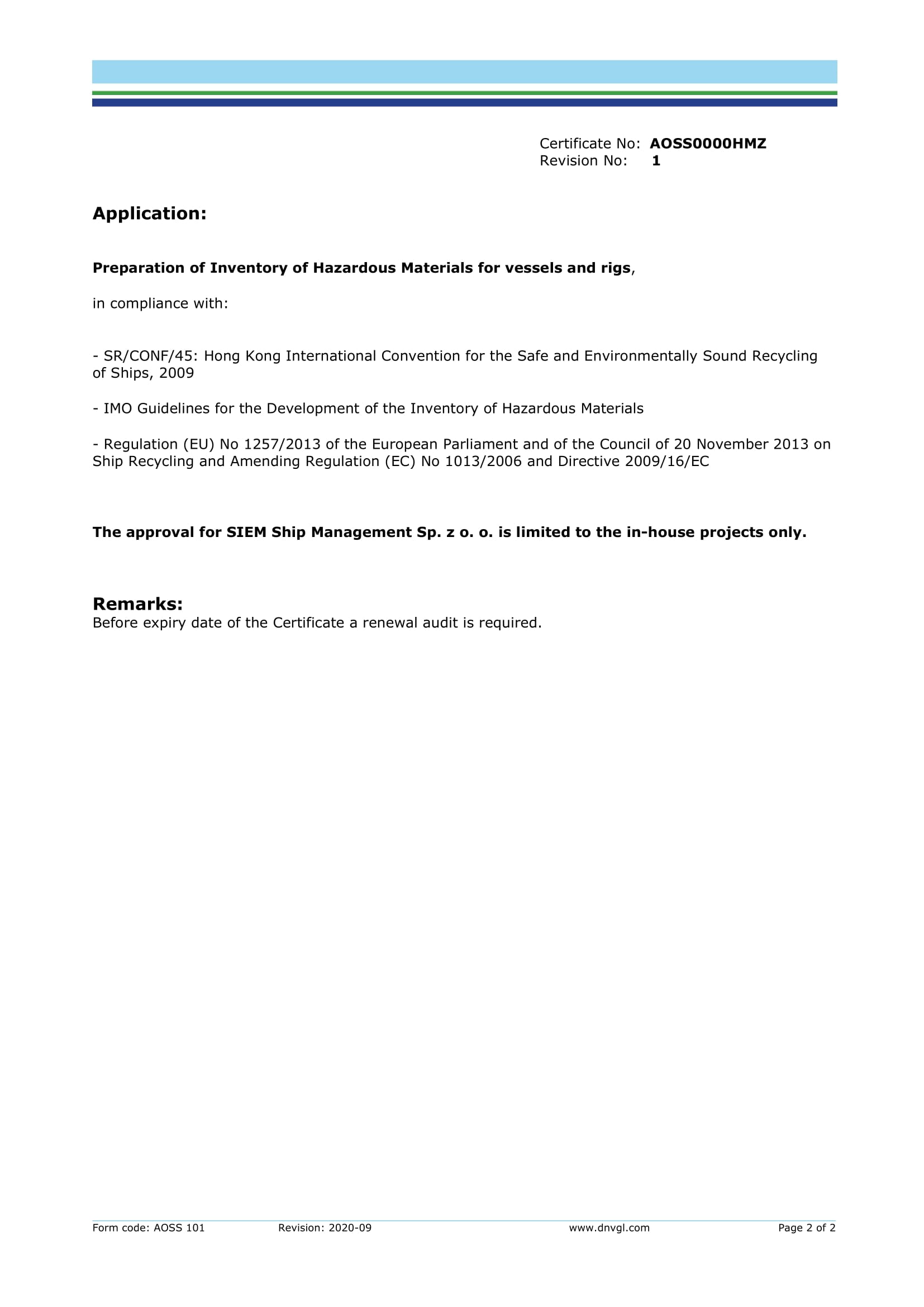 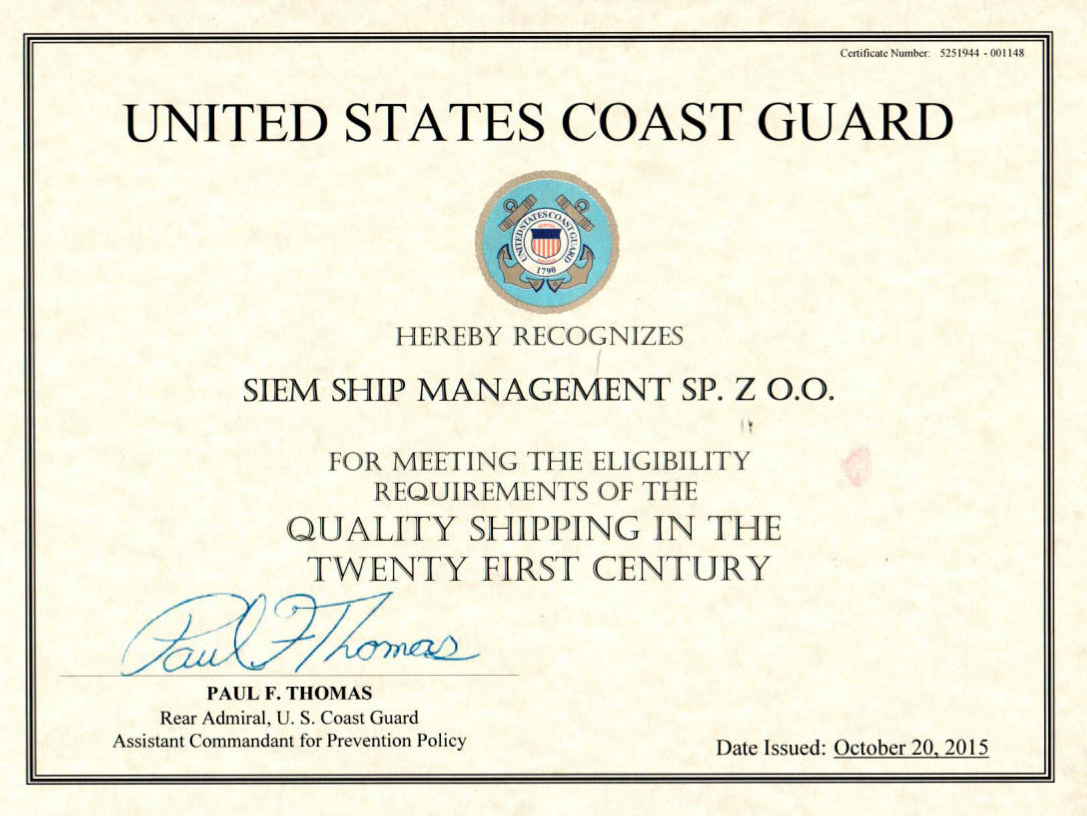 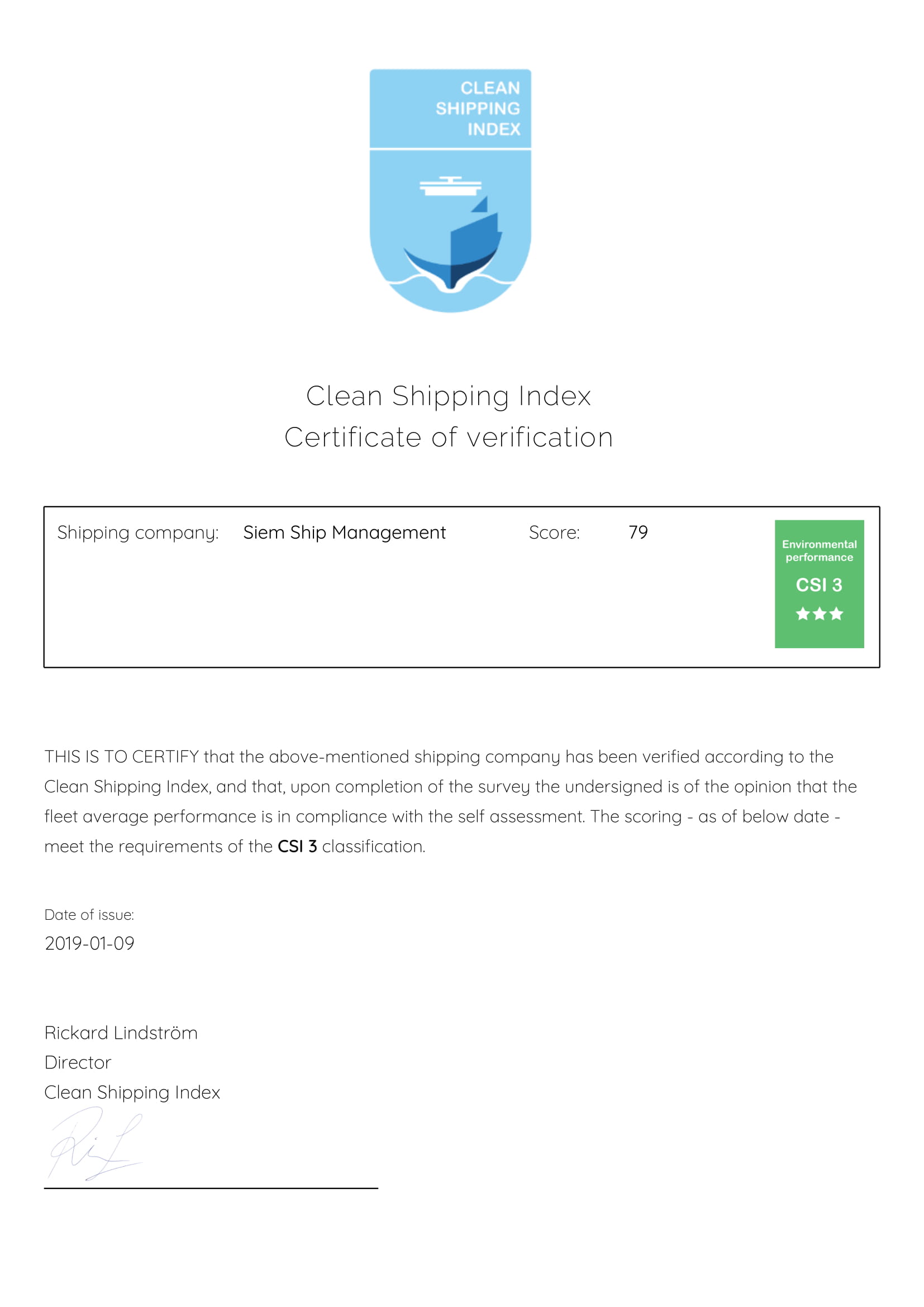 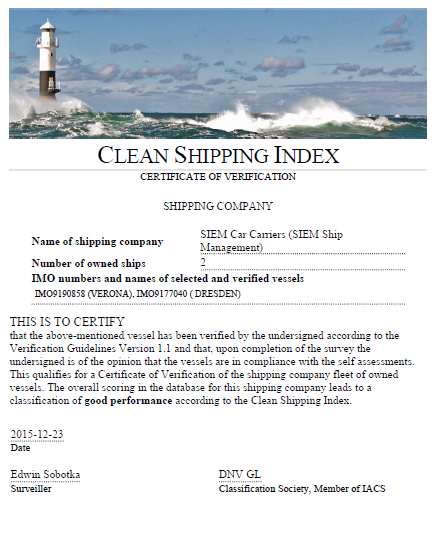 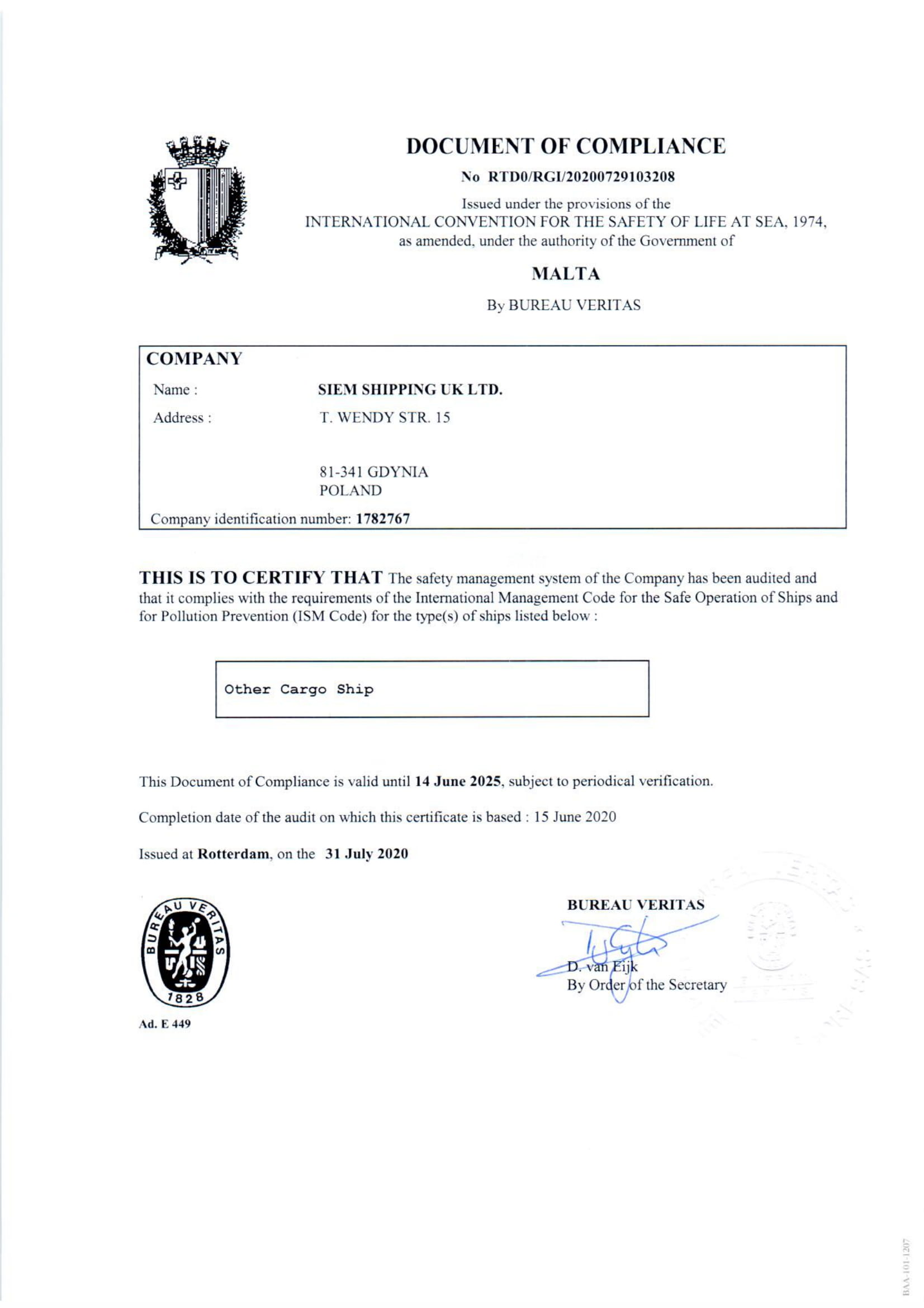 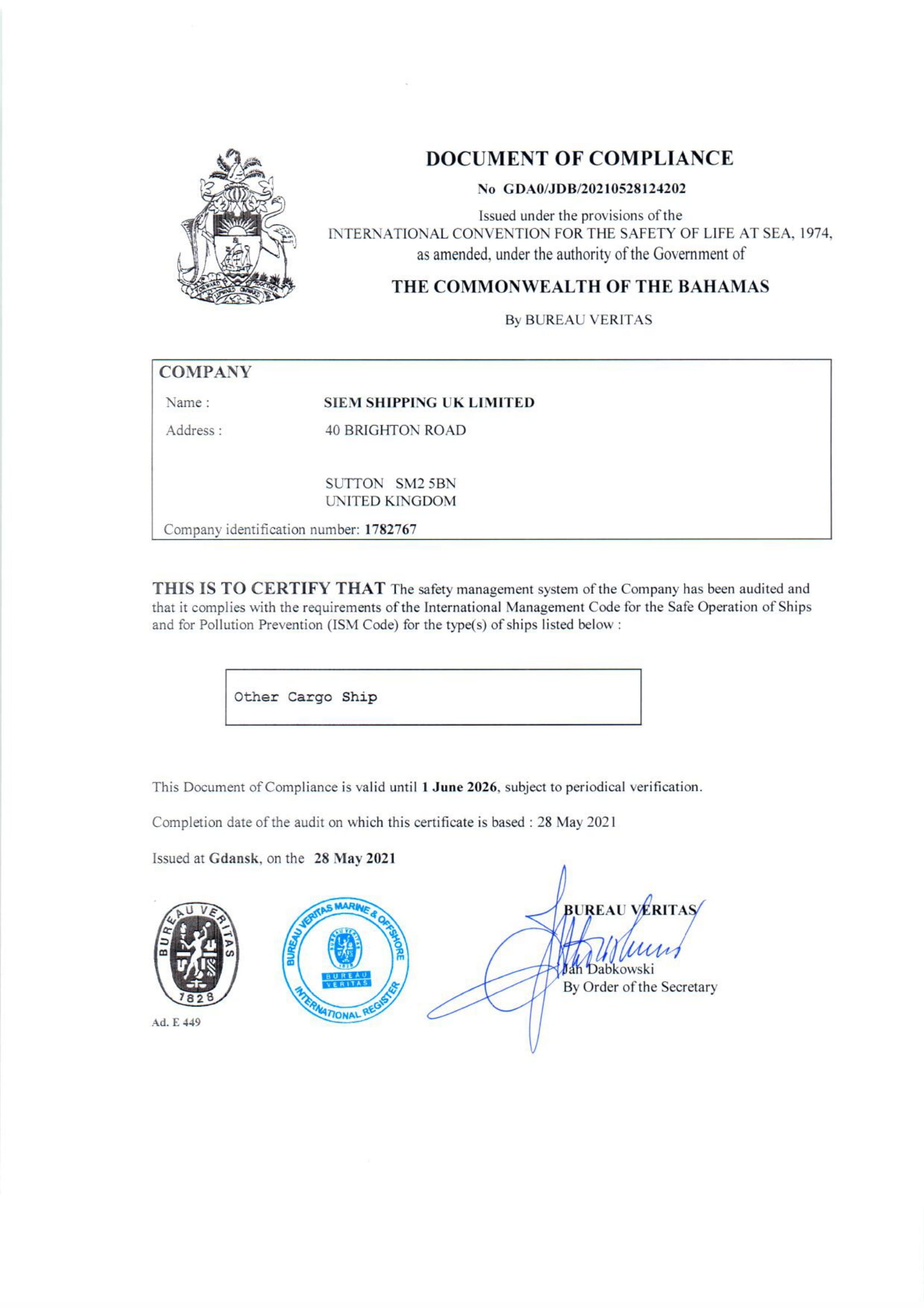 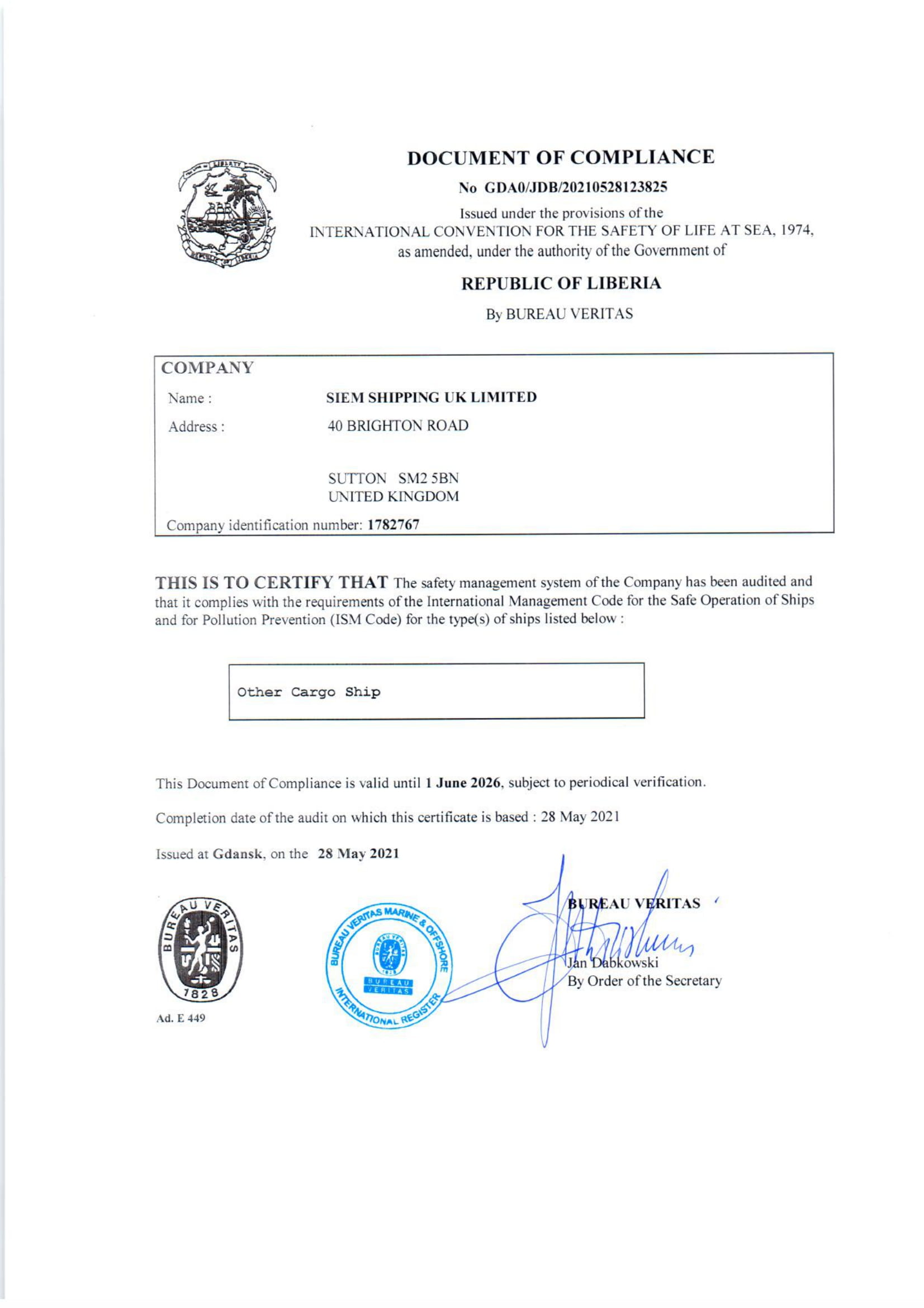 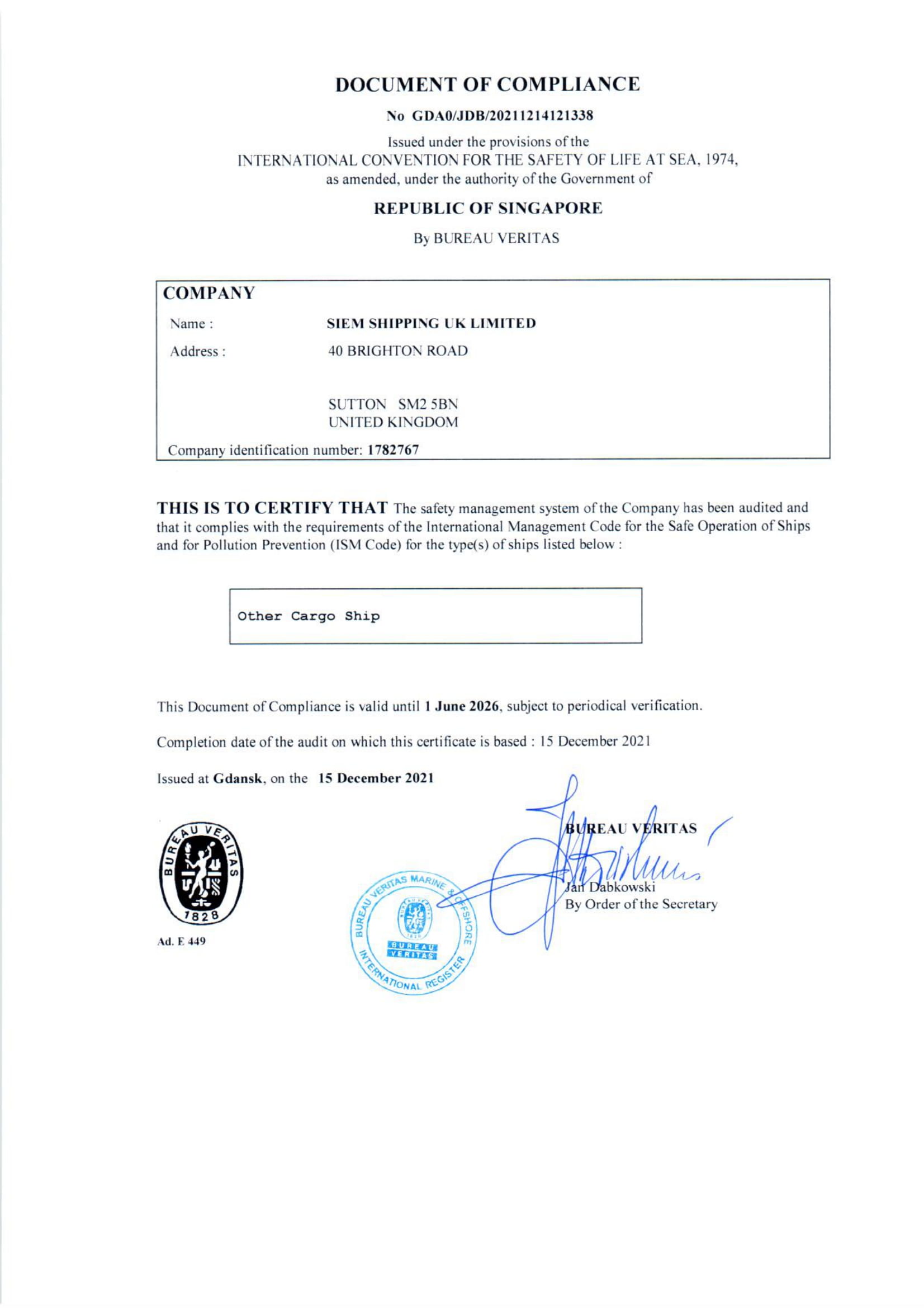 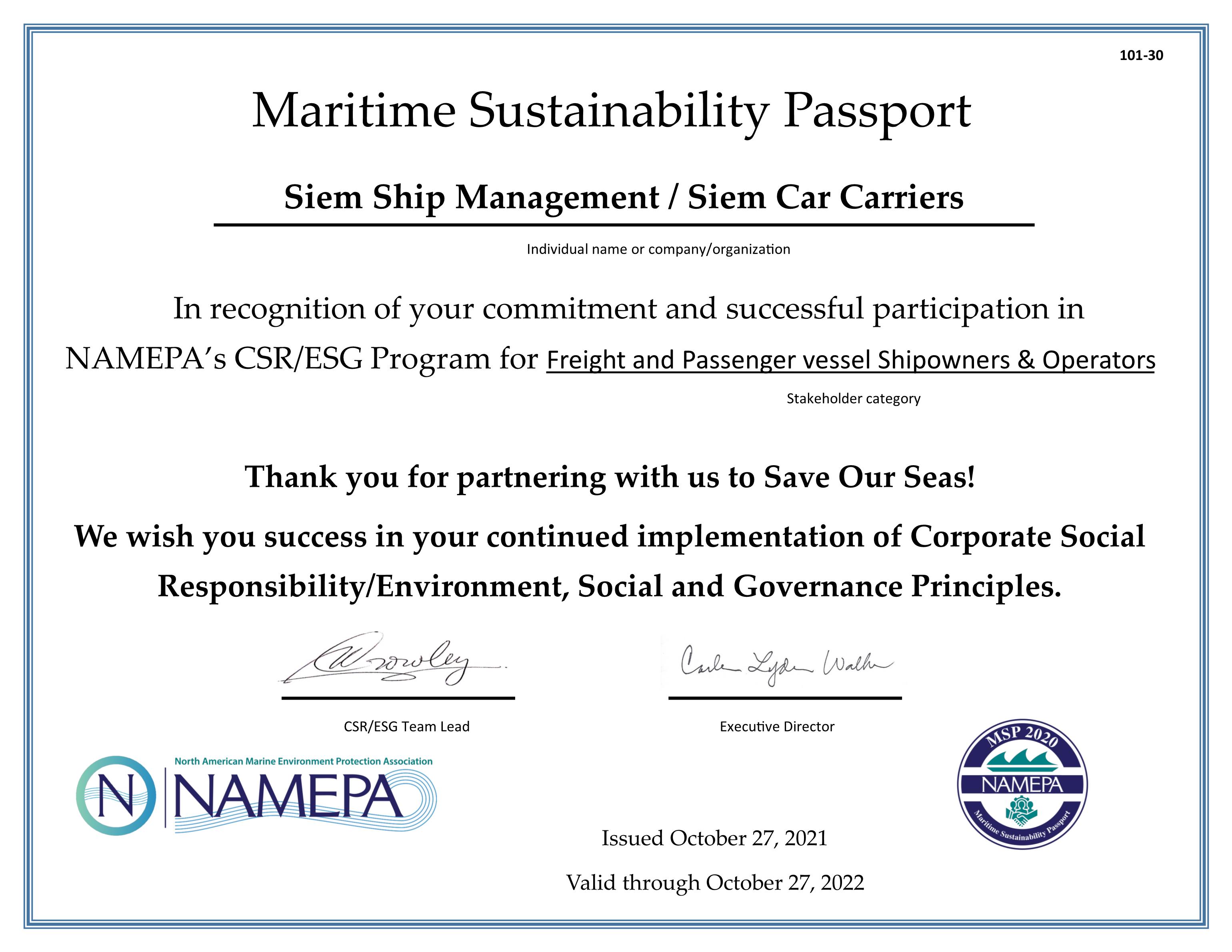 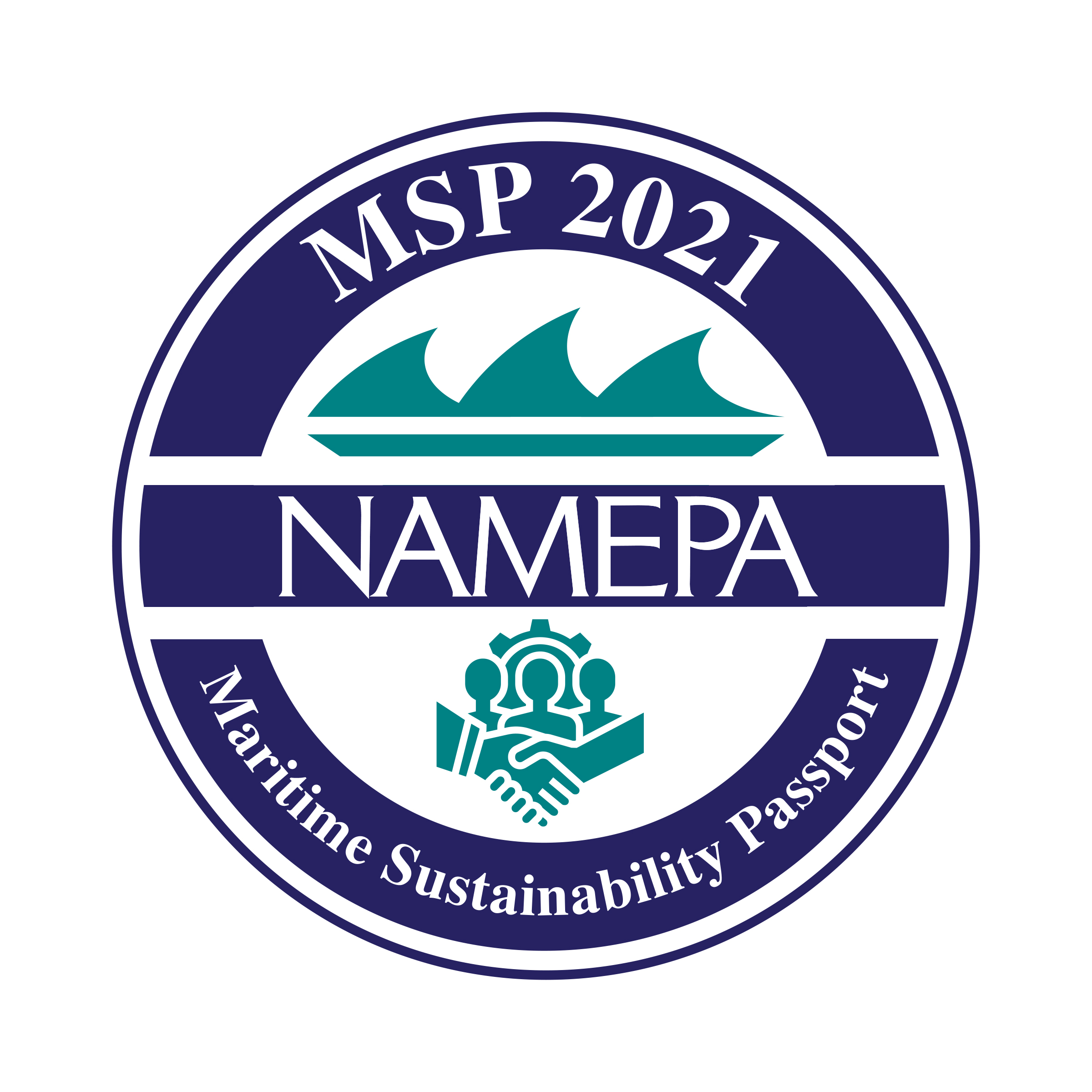 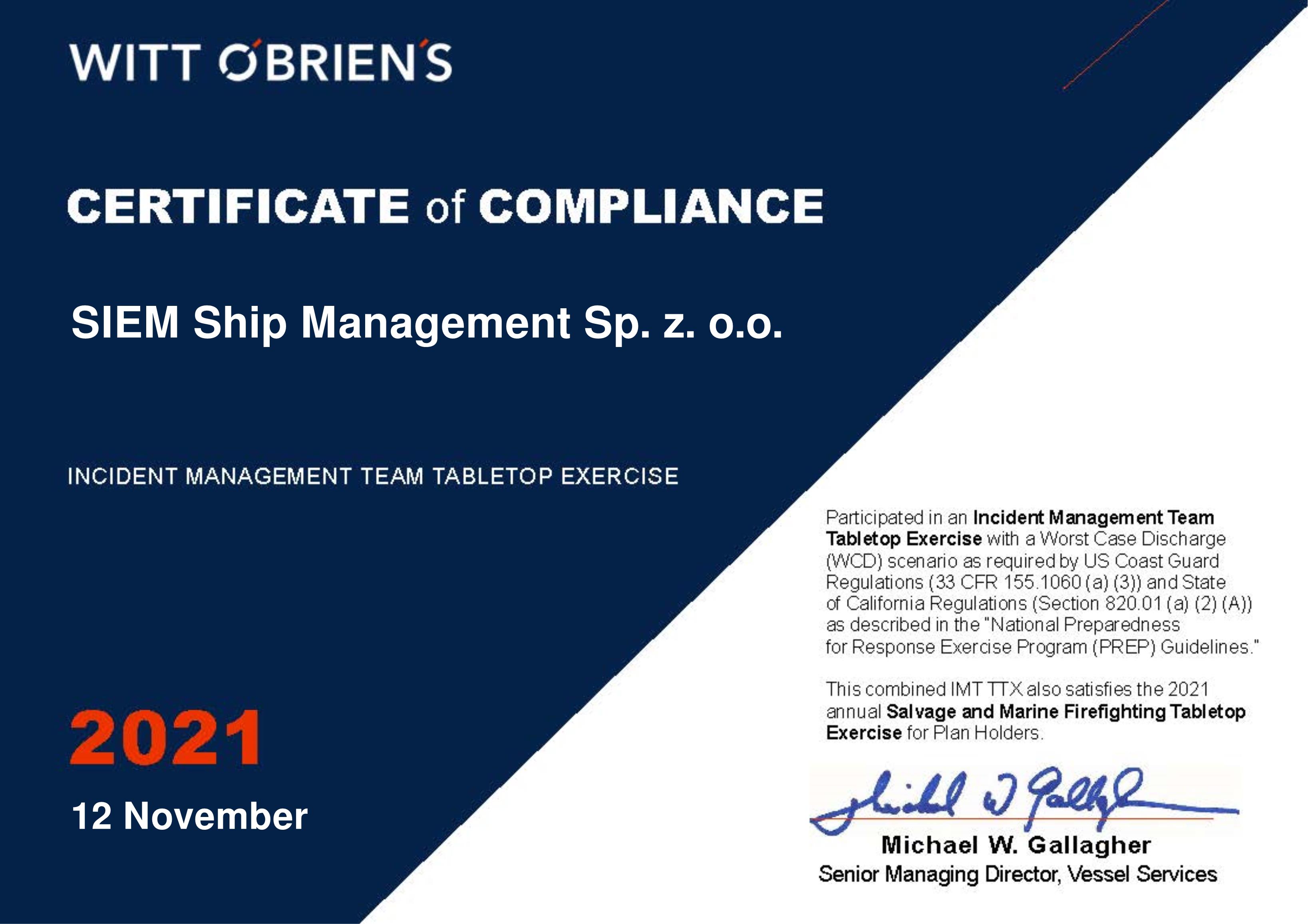 It is SIEM Ship Management’s policy to prevent injury and ill health to our employees and to continually improve the performance of the Integrated Management System, while complying to applicable legal and other requirements. SIEM Ship Management takes all practical steps to ensure that potential hazards and risks are identified and mitigated by the implementation of effective control measures. The correct safety equipment and personnel protective equipment will be provided to all employees.

SIEM Ship Management actively pursues ever improving quality and safety through programs that enable each employee to do their job right the first time and every time. SIEM Ship Management aims to remain a leading ship management company by continuous improvement. This involves the active participation and endeavor of all shore staff and seagoing personnel.

The mission of SIEM Ship Management is to be a low-cost, profitable, provider of ship management services for our charterers and business partners. We support the empowerment of the workforce and the utilisation of a safe workplace resulting in competitive and innovative quality service for customers while providing a healthy work environment and creating a positive long-term social, cultural, and economic benefit for employees, customers, suppliers and stakeholders.

Our high standards of work and safety are achieved by operating dynamic and improving Integrated Management Systems which meet the requirements of the International Standards ISO 9001:2015, ISO 45001:2018 and the ISM Code.

Meeting Customer’s expectations is the most fundamental source of the Company’s
business success and is the most important obligation we carry out.

We are committed to “A SAFE AND HEALTHY WORKPLACE”

Shipping business is strongly related to marine environment and may pose significant risk of sea pollution. At the same time changing climate conditions may affect our business in a negative way. Therefore, it is the SIEM Ship Management policy to provide quality services and at the same time minimize risks that could harm the environment by preventing pollution, preserving resources and improving energy efficiency.

We commit ourselves to:

Our commitment for environmental protection and energy efficiency is firmly embedded in our company’s procedures and instructions.

The mission of the SIEM Ship Management is to be a low-cost, profitable, provider of service for our charterers and business partners. We support any ideas and projects into competitive and innovative services for customers while protecting the environment and creating a positive long-term social, cultural, and economic benefit for the employees, customers, suppliers and stakeholders.

SIEM Ship Management shares with its surrounding community the, important responsibilities toward the environment in which we live and work. The company supports the responsible stewardship of resources, including air, land, and water. Responsible stewardship, combined with a continual improvement process, makes possible sustained economic development and an improved quality of life.

These high standards are achieved by operating a dynamic and improving Integrated Management Systems which meets the requirements of the International Standards ISO 14001:2015, ISO 50001:2018 and the ISM Code.

Environmental Protection & Energy Conservation Policy is to be followed by all employees.

SIEM Ship Management relies on the appropriate ethical behavior of its employees. Therefore, the practicing of ethical standards is based on the trust between the company and the employee.

The company activities take place in a multi-national environment and with multi-national staff onboard and ashore. Although the  understanding of business ethics can differ in various parts of the world, definition and uniformity in this respect is needed to ensure a business conduct to the highest standard throughout the company.

Our employees conduct their professions to the highest standards.

Company Policy on business conduct is always complied with at all times by those employed by or acting for the company. Our dealings and relationships are always such that our international reputation is high.

We comply with the known laws and regulations of the countries in which we operate or under which there is any contractual association. Our relationships is conducted ethically and within the law.

It is policy of SIEM Ship Management, and its subsidiaries (collectively the “SIEM Shipping Group”or “Group”) to conduct our business with honesty and integrity, and we expect all staff to maintain high standards. However, all organisations face the risk of things going wrong from time to time, or of unknowingly harbouring illegal or unethical conduct. A culture of openness and accountability is essential in order to prevent such situations occurring and to address them when they do occur, hence the adoption of this policy.

This policy takes account of the Whistleblowing Arrangements Code of Practice issued by the British Standards Institute and Public Concern at Work.

This Anti-slavery and human trafficking policy applies to all persons working in any capacity on behalf of the Siem Industries group of companies (as defined below).

Modern slavery is a crime and a violation of fundamental human rights. It takes various forms, such as slavery, servitude, forced and compulsory labour and human trafficking, all of which have in common the deprivation of a person’s liberty by another in order to exploit them for personal or commercial gain.

Siem Industries S.A. and all companies acting under its control (but excluding companies of the British Solar Renewables Group which operate under the “BSR Policy”) (referred to as “we” or “the Siem Industries group of companies”), have a zero-tolerance approach to modern slavery and are committed to acting ethically and with integrity in all our business dealings and relationships and to implementing and enforcing effective systems and controls to ensure modern slavery is not taking place anywhere in our own businesses or in any of our supply chains.

We are also committed to ensuring there is transparency in our own business and in our approach to tackling modern slavery throughout our supply chains, consistent with our disclosure obligations under the UK Modern Slavery Act 2015.

We require the same high standards from all of our lessors, contractors, suppliers and other business partners, and we achieve this through the following actions:

We take a risk-based approach to our contracting processes and keep them under review. We also conduct an annual, systematic review of our supply chains to identify areas in which the greatest risk of modern slavery exists, taking steps to minimise such risks.

The Siem Industries group of companies operates in compliance with the following principles, which they also expect counterparties to follow:

The Siem Industries group of companies will not conduct business with a person that does not comply with these principles.

This policy applies to all persons working for us or on our behalf in any capacity, including employees at all levels, directors, officers, agency workers, seconded workers, volunteers, interns, agents, contractors, external consultants, third-party representatives and business partners.